Understanding What is a Tandem Garage and Its Various Types

A tandem garage isn't just a fancy concept, it has a lot of practical value in today's space-constrained residential areas. We explore the concept of tandem garages, and also talk about its different uses. 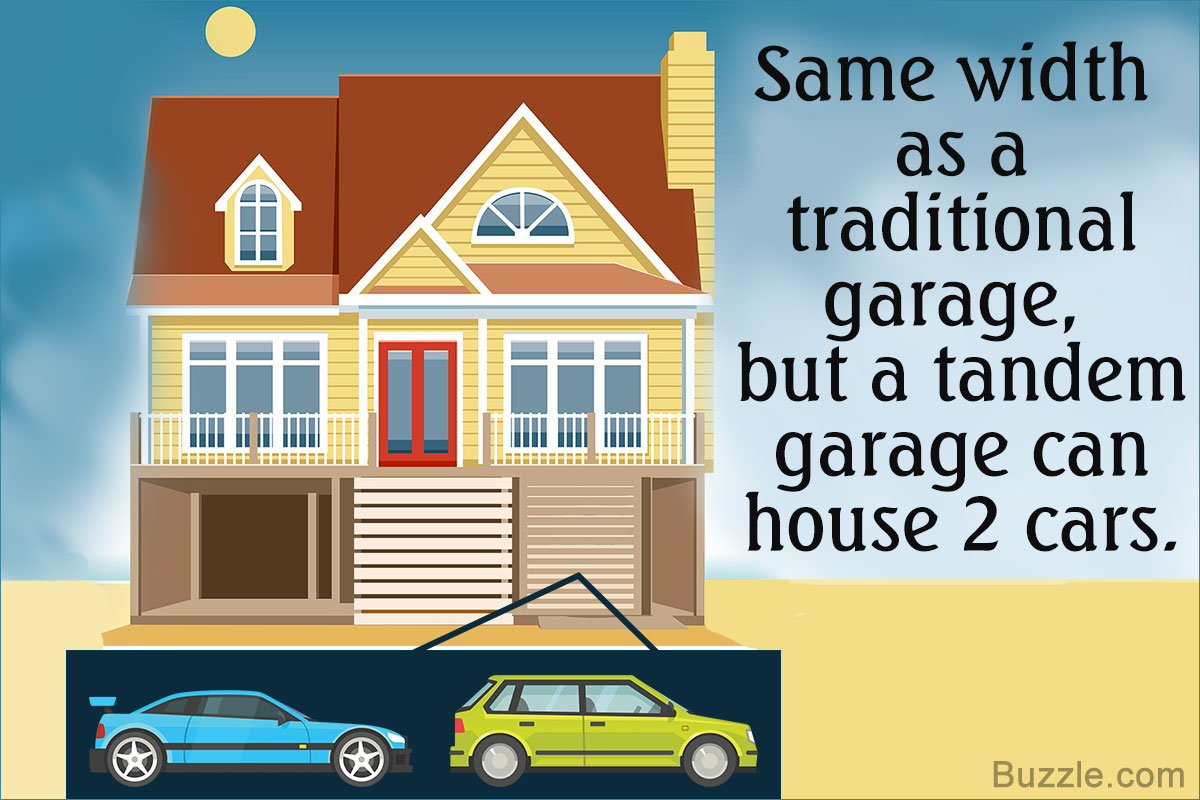 A tandem garage isn’t just a fancy concept, it has a lot of practical value in today’s space-constrained residential areas. We explore the concept of tandem garages, and also talk about its different uses.

Through the 1960s, most homes were built with one-car garages. However, by the end of the 1970s, owing to the emergence of many dual income families, two-car garages became the norm. Nowadays, multi-car garages are commonly seen in mid to large urban houses, with a growing number of those being tandem garages.

Though the builder and the purchaser of a house will always have their differences as far as the property value and rates are concerned, both will surely agree that every last square inch of the available space needs to be utilized as best as possible. Perhaps, it is this mutual understanding that has given rise to the concept of tandem garages.

In modern times, more than one car per family is a common sight. However, considering the ever-increasing property values, constructing a traditional garage for storing these many cars is most impractical. As such, a tandem garage was designed to help take care of this problem, by maximizing the utility of the available space.

What is a Tandem Garage?

If you need to park more than one vehicle, you obviously need a bigger garage. Traditionally, this means that the garage width has to be made big enough to accommodate the other vehicle, allowing it to be parked parallel to the first one. However, building a wider garage may not be possible for everyone.

Urban dwellings usually suffer from space crunch. Most urban homes are built on a relatively smaller plot, and therefore, increasing the garage width would mean having to sacrifice precious residential space. This isn’t a logical choice, and hence isn’t advised.

A tandem garage offers a neat solution to this problem. The concept behind it is simple – if you can’t extend your garage laterally, make it bigger longitudinally. Thus, a tandem garage is constructed by making it longer. The vehicles to be stored in such a garage are parked in tandem, that is, one behind the other, and hence, it gets the name tandem garage.

A typical 2-car tandem garage has the width of a standard single-car garage, but is nearly twice as long. It usually has one door at the front through which cars can enter or be retrieved. Where more rear space is available, some tandem garages may even have a door at the rear for increased accessibility to the vehicles parked in the interior portion.

Depending upon the number of vehicles required to be parked within them, tandem garages can be built of different sizes. The following two types are the most common configurations of tandem garages. 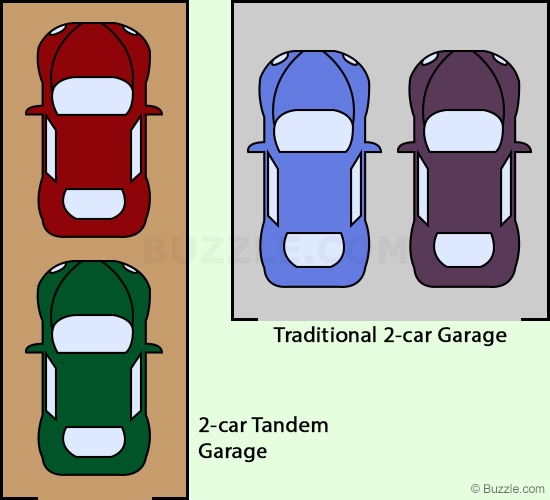 This is the most popular type of tandem garage. As shown in the above figure, in it, two cars can be parked one behind the other. Seen from the outside, it appears as a traditional single-car garage. 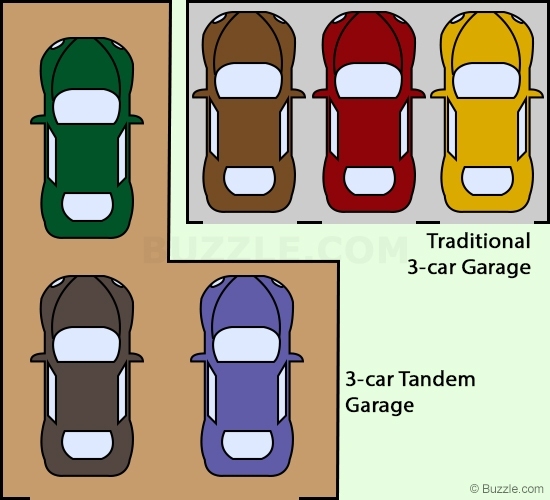 As the name itself indicates, this type of tandem garage is designed to house three cars. From the image, it can be seen that in such garages, two cars are parked one after another, while the third one is parked parallel to the first one. The front door of the garage can be made wide enough to allow the third car to be brought in, or an additional door can be provided. Seen from the outside, such a garage will appear like a traditional 2-car garage.

Advantages and Disadvantages of Tandem Garages

➦ Since tandem garages save on width requirements, they allow for much narrower construction of houses. This can significantly cut down on the plot area required for the construction a house, thereby lowering the housing price. The width of the driveway leading to a tandem garage too remains the same as that leading to a traditional single-car garage, which further saves on construction cost.

➦ From the point of view of a builder, the space saved by building houses having tandem garages can be utilized for building additional houses on the same plot. This can substantially increase profit margin.

➦ Deep tandem garages can make available additional space, which can be used as a storage or work space.

➦ In tandem garages, cars are parked one behind the other. As such, to remove the inner car, the outer car has to be moved out of the way first. This is the biggest drawback of tandem garages, and the reason why they haven’t become as popular as one would expect. One solution to this problem is to add an additional door to the rear of the garage. However, this isn’t possible if the space at the rear end of the plot is limited.

➦ Zoning codes in several places require a certain minimum amount of space to be allotted to parking while constructing houses, It may happen that the inner space in a tandem garage is not counted as a separate parking space. In such a case, building a tandem garage would only be a waste of time and money.

➦ Due to the associated parking inconvenience of tandem garages, many people still prefer traditional garages. Hence, a builder may find that there are not many takers for houses with tandem garages.

Tandem garages offer a practical solution for housing vehicles in the limited space of urban residential plots. Along with this, they can also be used for storage or as workplaces. By extending this concept further, many different ideas for tandem garages can be arrived at, which can fulfill almost any requirement.